Take a look if you’ve a moment! 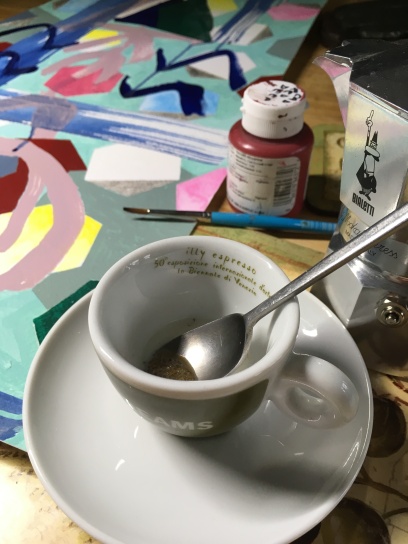 With nowt worth watching on terrestrial telly nowadays I was drawn to The Trip to Italy last evening. On retiring my wife suggested I shouldn’t be so envious of funds as I’d expressed, quite forcibly, the desire to sample some of the venues visited in the programme…and I agreed that actually I was doing alright enough with our requiring 500+€ a night accommodation in the Med (not that it wouldn’t be fun…).  This came back to me this morning with the Mediterranean weather of late having deserted us for ‘typical’ English summer (cold, wet and windy) and I decided to bring a small banner work into the kitchen where I can work on it in the warmth.  Along with a pot of decent coffee and a soundtrack of Corrie Dick’s wonderful ‘Impossible Things’ album life doesn’t get any better…

As it happens Corrie turns up on the new Dinosaur album…notionally Laura Jurd’s band but I reckon now truly a collective effort with – certainly Corrie’s input – but also as intense a presence from the other two members, Elliot Galvin on synths and Conor Chaplin on bass. Together they have made some especially extraordinary music this time around, not that their first album wasn’t a great piece of work (recognised with a Mercury nomination). But this one is a peach mixing jazz with, well, just about everything, all sorts of influences from sixties UK jazz (think Gilles Peterson’s Impressed samplers), through roots folk, to heavy metal riffs all bound together with Laura’s superb trumpet work that has a fluency and lyricism blended with an edge that evidences her understanding of the very best contemporary jazz phrasing and technique.

Anyway enough of the music reviews (probably best left to better ears than mine) and back to the paintings. As it happens I’m less focussed on the pictures at present (they seem mercifully to be taking care of themselves both colour and structure wise at the moment) and more thinking about presentation. Originally they were to be proper scrolls with canvas backing and rollers but then I decided to go with framing, cropped to the edges in a white stain wood. But now I’m considering an even more expensive solution, plain oak with a mount – go figure! (and not so much bliss…)

I’ve written before on the subject of listening to music whilst working and today I’ve spent pretty much the whole day in the studio.  Usually it’s instrumental music only (I find it difficult to concentrate with lyrics) but sometimes the process is just laborious.  Like here where I’m colouring in forms ahead of the later stages.  And given my location the most appropriate rock music seemed to be about the only post millennial UK rock band I’ve much time for (most of them seem like second rate retreads of the 70’s – must be my age I guess).  I’m talking of British Sea Power whose work – especially the longer work outs like those on Man of Aran or True Adventures from Open Season or Once More Now from Valhalla Dancehall I like a lot.

Then again the second and third stages of this piece were a lot less satisfactory (as above!).  I think I can still rescue it but it’s hard when you’ve put in such effort but that’s often the way with painting so maybe it was a day well spent.  In any event the music’s been a treat – and if you know their work (and the location I’m in – see previous posts) so appropriate to the context.

at least that’s what we’ve been taught to believe.  But its a well kept secret that there is great weather to be had up here in Scalloway.  Certainly over these past two (first) days of our adventure over the month of August.  So far its been azure blue skies and full on sunshine.  The Met Office has officially confirmed that Shetland had more hours of sunshine than Cornwall in July and so far August is following suit. 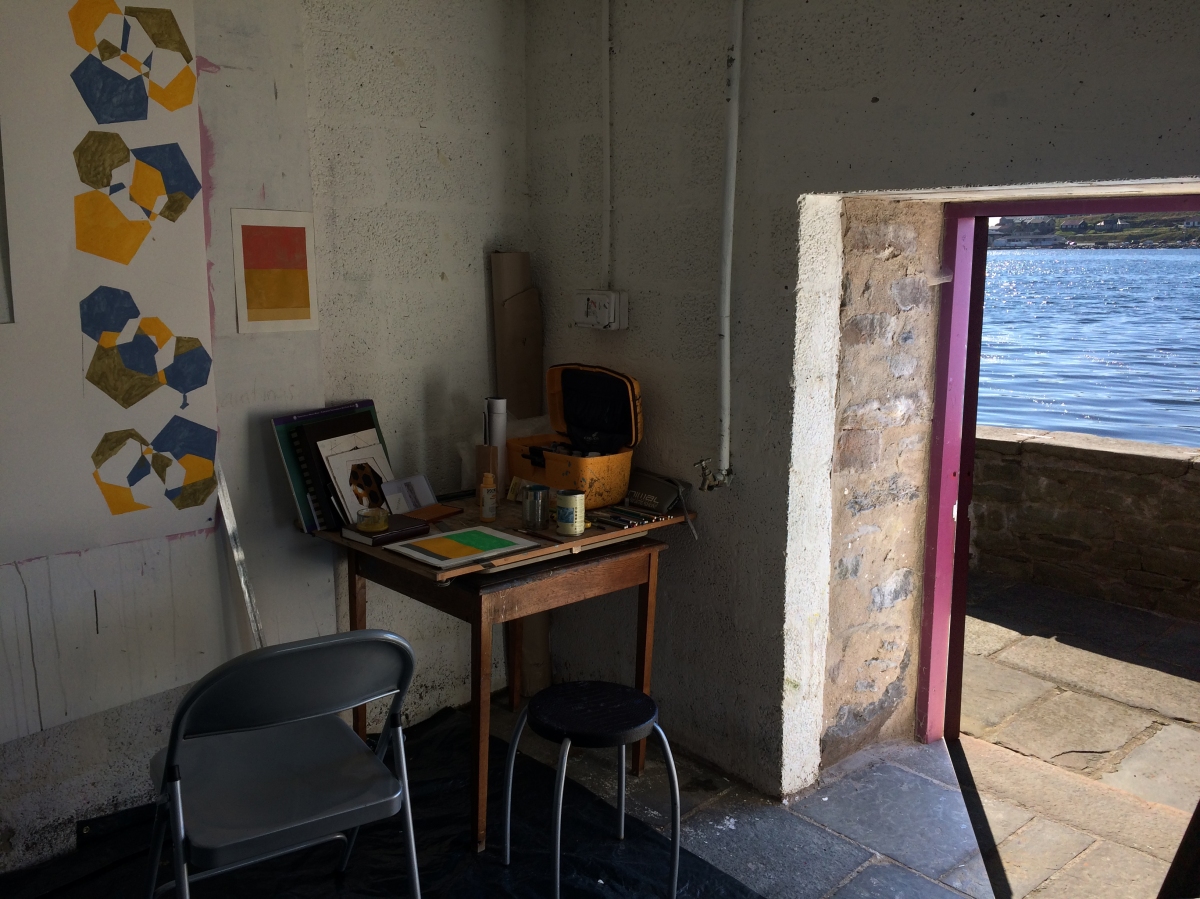 Not that we’ve been idle…the studio has been tidied and arranged to suit our purposes…and the beginnings of work underway – despite the absurdly wonderful context if you step through the doorway!

so goes the title of one of Roy Lichtenstein’s better pictures (and one of his more amusing titles).  And one of my favourite quotes comes from John Cage:

“When you start working, everybody is in your studio- the past, your friends, enemies, the art world, and above all, your own ideas- all are there. But as you continue painting, they start leaving, one by one, and you are left completely alone. Then, if you are lucky, even you leave.”

Of course you rarely get those times, and even when they do turn up, it’s often for only a few seconds.  I find music helps…not vocals though…but either classical (occasionally for me) or jazz (much more my thing).  Today, courtesy of Miles Davis’s ensemble for the ‘In A Silent Way’ sessions, I got a few moments – not enough to finish the painting above but a few precious moments where it just started to sort itself out.  Just need a couple more occasions when we all steal away and it’ll be peachy! 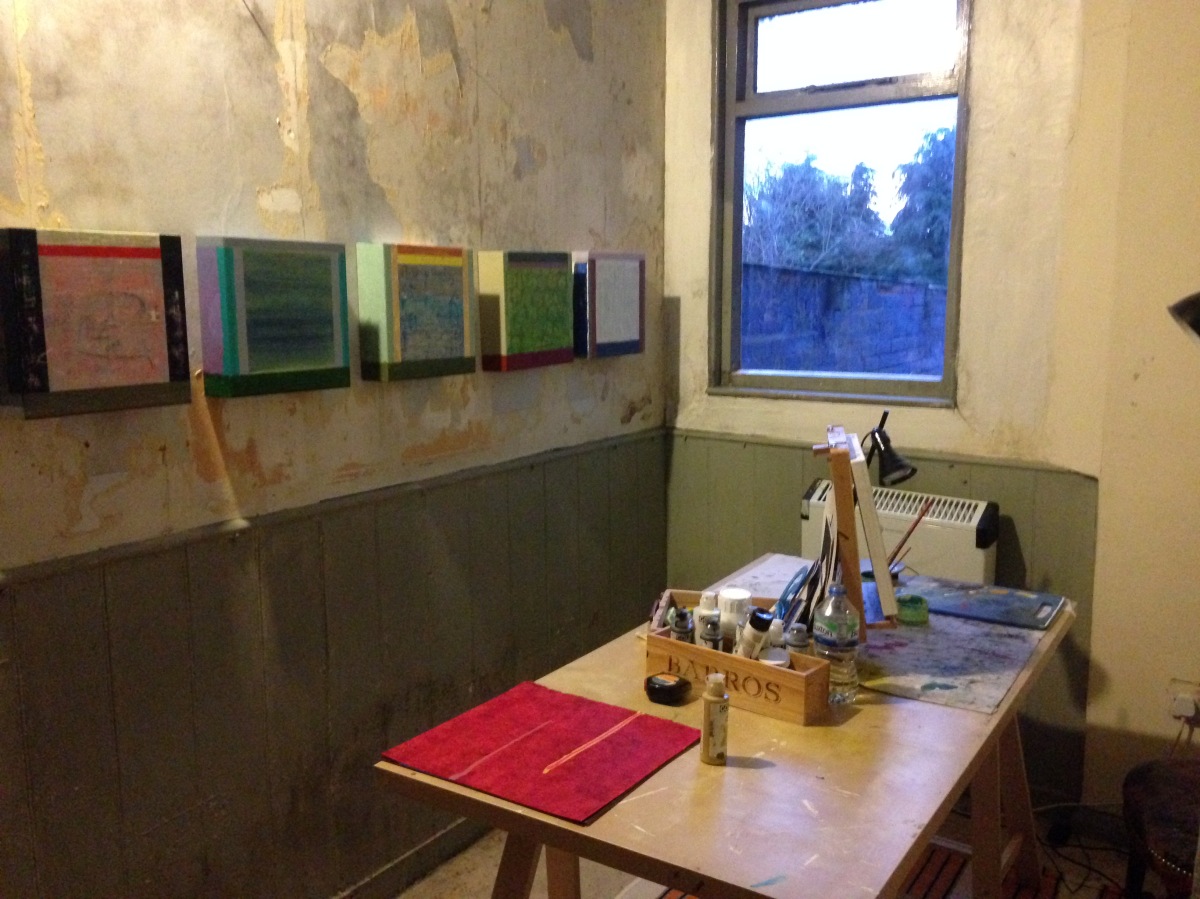 I’ve written before on the subject of studio.  Here’s the modest new space I’m working in. A smaller space required better organisation (at least at the beginning…) and it also offers another opportunity to clear the mind.  The advent of the digital age has offered us much of value as well as the avalanche of dross and worse but it can be overwhelming.  I sometimes think that making paintings (and a lot more besides) is futile when there seems to be so many of us at it!  There’s a mountain of great stuff already out there and the more assiduous chroniclers of the web keep posting more and more.  Of course one could simply ignore it but the will required is beyond me (and most others I think?).  So you keep on if, like me, its hard wired into my sense of identity.  But choosing what to do and how to do it is quite a task…hence the need to scrub up the brain cavity from time to time.

There is one driver that is playing well with me right now though.  I began the year (partly out of necessity) certain that this would be a year without substantive costs added into the equation – and I’ve pretty much stuck to it.  I had been thinking of reinvesting in new stretchers and canvases for 2016 but as I’ve looked around there’s plenty of unfinished, unresolved work and material hereabouts so I’ve decided on another year of economy.  In addition I’m planning some more studying around issues of resource management and sustainability so making a greater effort to detach myself from a consumerist approach to art making is to be recommended!

Yesterday my wife suggested I link my blog up to the other social media I use…I knew this was possible but as with many aspects of the new technology I often fail to get beyond the basics of these things for quite a time. But I had a few moments and of course its only a moment’s engagement to deal with. One consequence of doing this that I’m sure others have experienced is the exponential growth in responses…in my case from a very small handful of regular readers to, well, a slightly bigger armful. And yet already it is apparent what an amazing variety of quality creative activity and commentary is out there. So much so that it feels as if it might overwhelm my capacity to cope with it. So this is an apology to all those lovely people that responded to my last post…that I shan’t be able to give all your blogs anywhere enough time that they deserve.

But at least I can say that Otto‘s blog contains a wealth of sound and insightful ideas and advice on photographic practice today and that Fiona is writing equally fascinatingly on Spanish Cinema. That John and Claudia are talented and prolific painters whilst Patricia is making some terrific sculptural pieces that deserve wider exposure and that there are others out there that I know already and still others that I don’t doing exceptional creative things and recording and reporting them through this medium…and that I’d need many, many parallel lifetimes to do them all justice! So for now I’m simply saying both to my regular friends (both those I know in ‘analogue’ and those online) and those who dropped by – thank you.

Today was a good day…many years back I bought a catalogue at a show of Barnett Newman’s work at the Tate (yes it was that far back that there was only the one…) and I wrote in big black marker pen inside the cover…’Studio is Sanctuary’ – a quote from the artist from the text.  Never a truer three words!