An amusing byproduct (at least it tickled me) of our adventures in Scalloway has been my ‘body series). Occasioned initially by the ominous floating glove that had attached itself to a clump of weed that – because of the good weather – didn’t move from beneath our window above the harbour. It then became obligatory wherever we went to spot gloves and the odd boot that had fetched up in the water or along the shoreline and take a picture. 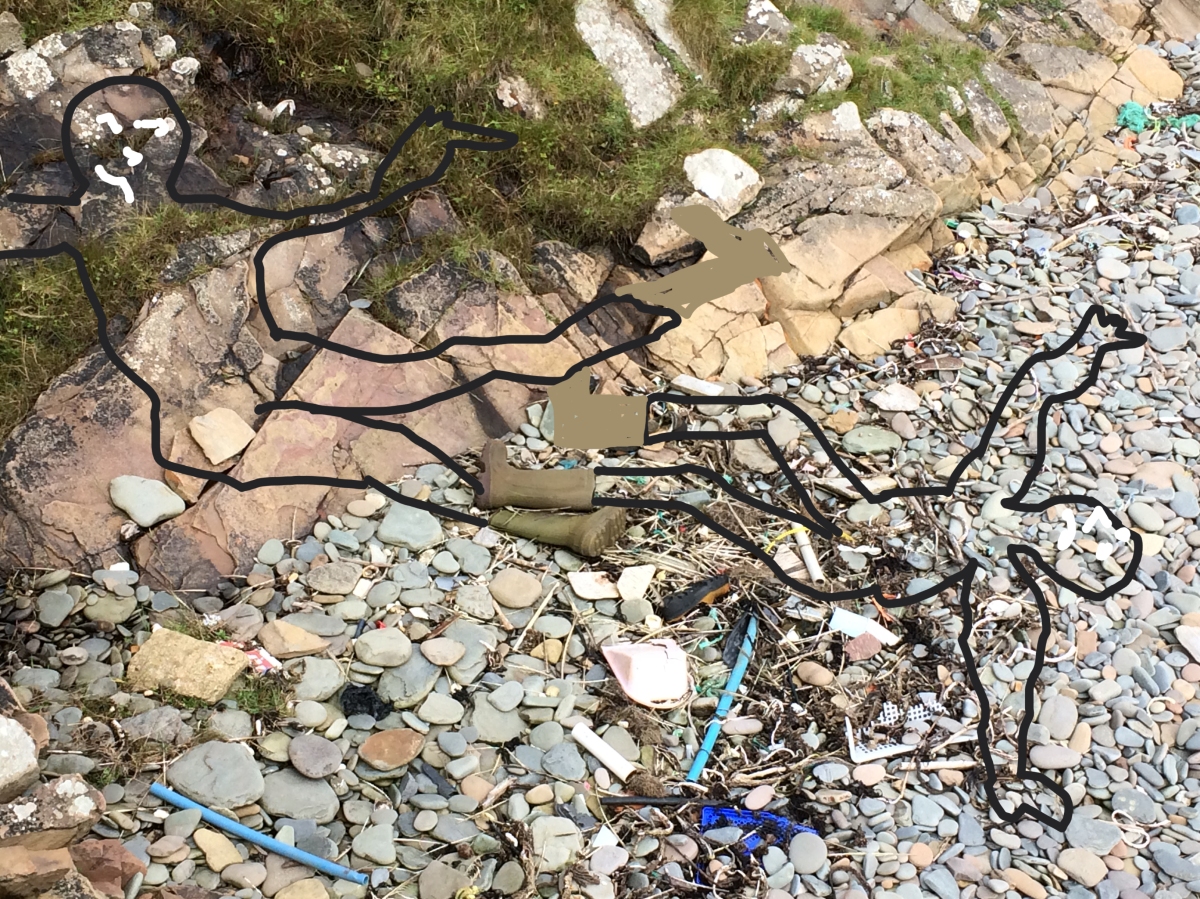 These were then doctored to add the body that was attached. Over time fifteen of these pictures emerged and were we to have gone searching I don’t doubt more would have done so. Of course around a working harbour like Scalloway its inevitable that a few go missing occasionally. But there’s a more serious side to it as the locations tended to be those where the general flotsam and jetsam gathered. So take a look at what’s there and you see just what is filling up our oceans… Every one of the seemingly pristine beaches has its pile of detritus washed up from the sea (that is collected up to keep them looking that way) and its becoming a major global problem. So much so that my nonsense could in time to come turn out to have been prophetic…unless the upbeat elements of this Telegraph report are right.

Imagine its around 1420 and a ship is sailing north, away from the leading Hanseatic League port of Bergen, having left Bremen or Hamburg some time ago, and making for Hillswick, its destination to trade goods for salted fish, lamb and skins.  Although on the last leg of its long journey it espies rough weather from the west and puts into the natural harbour of Schaldewage or Scalloway as we now know it. At that time the place is part of the Norse rule of the Islands, in fact it is only a couple miles south of Tingaholm, the Thing, where laws are debated and enforced.  Until a century and a half later when Earl Robert Stewart moves it to the town, where twenty or so years on his son Patrick Stewart (presumably before becoming ‘Professor Charles Xavier’ or Jean Luc Picard – ha ha) builds his spanking new castle in the ‘town’ and the ‘ancient capital’ of the Islands.  The town sits on the bottom end of the Nesting Fault, a splay of the Walls Boundary Fault, itself possibly connected to the great Glen Fault.

So The Booth is situated in an immensely rich and interesting location.  Literally on the edge of the fault, the Castle a few yards away, the water of the harbour right below our window. Do learning about any of these things influence the production of abstract paintings I wonder? I’m just one of many artists who occasionally talk airily about ‘a sense of place’…but what does it actually mean?  I’m ploughing my way, painfully slowly, through Mary Jacobus’s Reading Cy Twombly (its a very rich and rewarding book but requires a great deal of contextual understandings!) and she quotes from Shelley “Naught may endure but mutability” in regard to Twombly’s Letter of Resignation.  The line has resonances for me every time I look up and out into the harbour and the ocean road beyond it…the sea and its ever changing moods and cadences.  And perhaps its that, more than anything, that creates ‘a sense of place’. 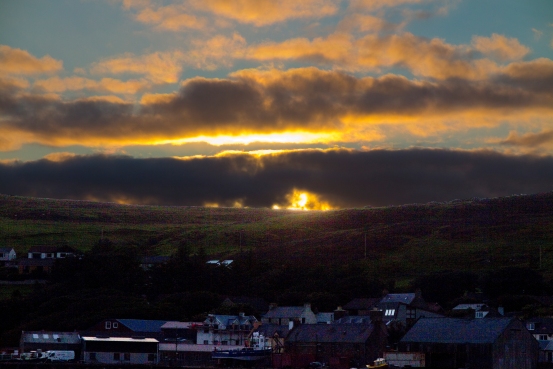 As anyone reading this will know we are living for the month in a small bedsit on the harbour in Scalloway on the Shetlands and its proper lovely as we Devon folk say.  In fact when the sun shines (and we’ve more good days than not) it reminds one of how the West Country seemed to be when I was a child.  Nowadays the crowds down in Devon & Cornwall make it harder to love but back then before motorways etc.  Anyway enough of my misremembering as, apart from sitting staring out the window or visiting unspoilt and empty beaches, we are here to work.

But the rub is that you start to think about what you do and how you go about it.  Yes I know one should be doing that all the time anyway…but holidays just exacerbate this…and added to which there are fewer materials and supports to hand…and ideas get stuck in your head in ways that just don’t happen at home.  Its all rather confusing!  So here I am rethinking, tinkering really, with both the Wonky Geometry and the notion I had arrived with (outlined a few weeks back) and fetching up with something that’s quite a departure.  Should I be worried or concerned?

Given that it has been raining cats & dogs for over eighteen hours now there’s plenty of opportunity to get on with the work!  So I have at last finished at least one piece to my satisfaction.  It derives its title from both the context in which it has been produced (on the waterfront here in Scalloway) and a poem by the late Peter Redgrove entitled On Losing One’s Black Dog.  The view from our French Windows reminds me a little of the time when, albeit briefly, I knew Peter as a student at Falmouth where he was, luckily for us, the Complementary Studies tutor.  He was very finely attuned to the Cornish environment and spoke eloquently and imaginatively about the ‘Black Dog’ in its several senses, one of which (not the one referred to directly in the poem) concerned the melancholia that descends on all things Cornish in the winter months.  After today’s performance here (see photo below) during August one can only imagine what mid-winter brings to the folk here on Shetland! 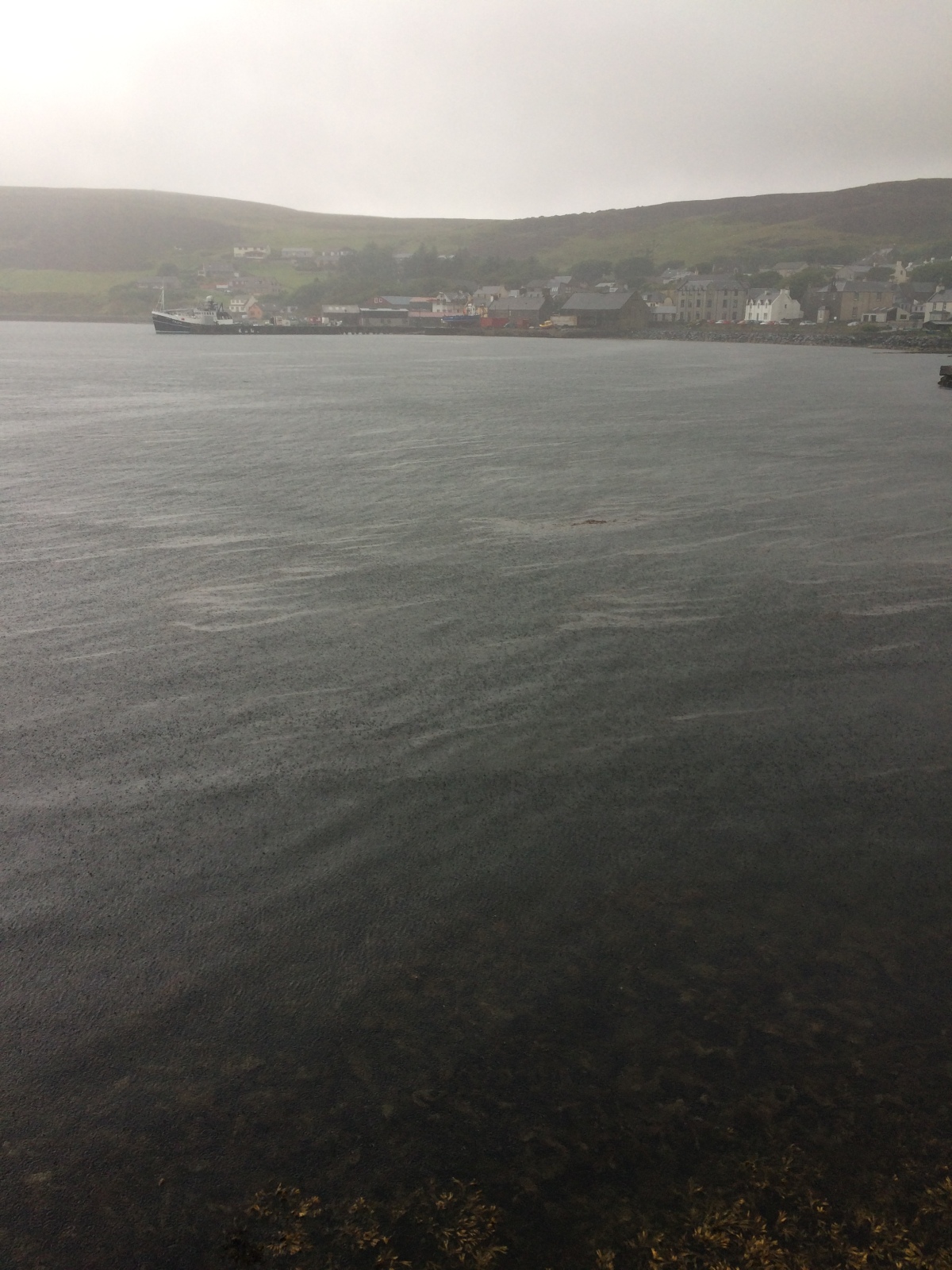 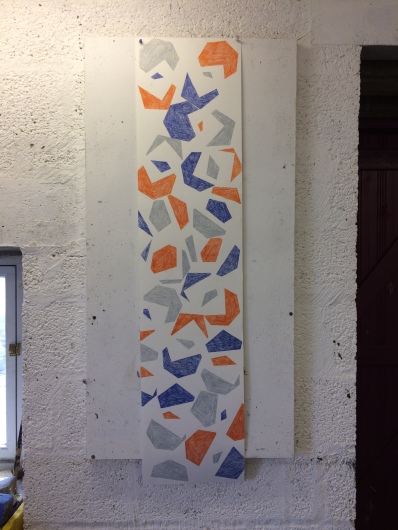 I’ve written before on the subject of listening to music whilst working and today I’ve spent pretty much the whole day in the studio.  Usually it’s instrumental music only (I find it difficult to concentrate with lyrics) but sometimes the process is just laborious.  Like here where I’m colouring in forms ahead of the later stages.  And given my location the most appropriate rock music seemed to be about the only post millennial UK rock band I’ve much time for (most of them seem like second rate retreads of the 70’s – must be my age I guess).  I’m talking of British Sea Power whose work – especially the longer work outs like those on Man of Aran or True Adventures from Open Season or Once More Now from Valhalla Dancehall I like a lot.

Then again the second and third stages of this piece were a lot less satisfactory (as above!).  I think I can still rescue it but it’s hard when you’ve put in such effort but that’s often the way with painting so maybe it was a day well spent.  In any event the music’s been a treat – and if you know their work (and the location I’m in – see previous posts) so appropriate to the context.

Ah…yesterday…and now today.  It doesn’t pay to be clever does it.  Bragging about the weather has seen a day of squally rain, some of it quite heavy.  We have managed to get out twice for reasonable strolls without getting wet but a goodly part of the day has us confined to the studio.  Some decent progress made but in order to cheer us on a grey day I’ve pinned a few studies I made back on Cape Cornwall a few years back that put some strong Cornish colour on the wall.  Oddly enough we were there on the first of November with a temperature (and sun to match) of seventy degrees c.  And ‘the donald’ says global warming doesn’t exist! 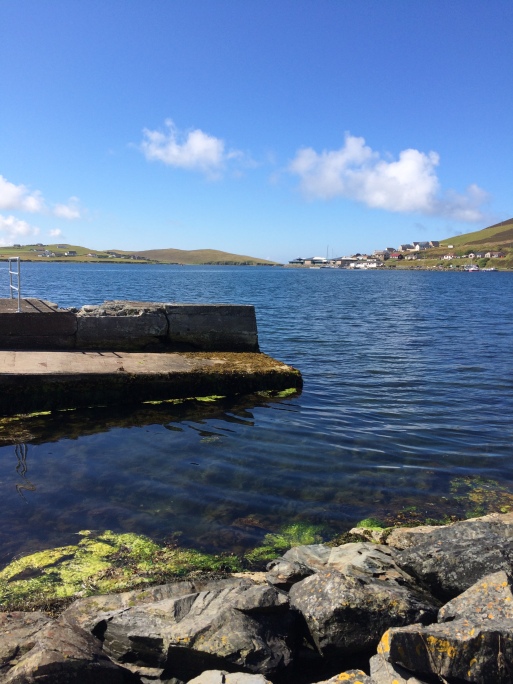 at least that’s what we’ve been taught to believe.  But its a well kept secret that there is great weather to be had up here in Scalloway.  Certainly over these past two (first) days of our adventure over the month of August.  So far its been azure blue skies and full on sunshine.  The Met Office has officially confirmed that Shetland had more hours of sunshine than Cornwall in July and so far August is following suit.

Not that we’ve been idle…the studio has been tidied and arranged to suit our purposes…and the beginnings of work underway – despite the absurdly wonderful context if you step through the doorway!

So shortly we are off to the Shetlands, to Scalloway and to The Booth.  For a month we will be living and working there and it is always tricky on such an expedition deciding what to take by way of materials.  You don’t want to be too prescriptive on the one hand but properly equipped on the other.  Especially so as material supplies may be tricky there (though of course it might be much easier than I’m imagining).  Nonetheless I have drafted a sort of plan!  Some time back I was rather taken by a small clutch of Knitting Sheaths that reside in the museum there – I’m hoping to see them during our stay.

And I’ve riffed on them over the past few months in photoshop…so I have at least the beginning of imagery that hopefully relates to my Wonky Geometry.  Then a trip to the Ashmolean a while back with my pal Simon to see the wonderful Raphael drawing show had us wandering through the room of Japanese scrolls – kakejuki…brilliant!  Just the thing for a trip away…paper based and roll em’ up to transport back easily.