Being involved with the Contemporary British Painting setup has been a delight.  Not least for the opportunities that it has afforded.  I owe it a vote of thanks and also that terrific painter Terry Greene for the introduction.

And so we come to this…yes/no an initiative curated by Deb Covell, Paula MacArthur & Judith Tucker and built by Isaac Ashby.  With all the ‘lockdown’ craziness it is wonderful to be involved.  Check it out on the link above but I’ve put my bit and the fly through below. 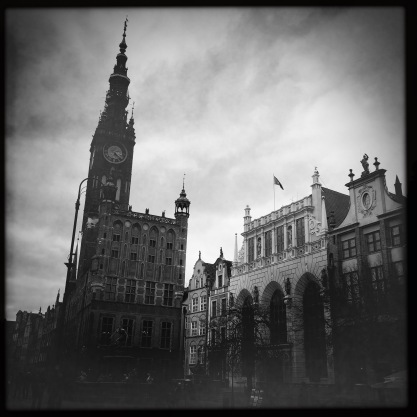 The trip to Gdansk was exceptional for many reasons.  Chiefly perhaps that it was so unexpected and unplanned.  The marvellous and enterprising Robert Priseman must take the credit for organising the Made In Britain show drawn from his (and Ally Seabrook‘s) collection that propelled the decision to take a visit to the city.  Although I only have a very modest ‘walk on’ part in the event going over seemed like a no brainer.

The show itself looked very handsome.  And hopefully my picture didn’t let the side down, settled on the wall, between Lucy Cox and Stephen Snoddy – so at the least it was in good quality company.  The collection is full of excellent work, both figurative and abstract, with both a smattering of famous names (I doubt my work will ever be nestled so near to Alan Davie‘s, one of my teenage idols!) and good representation from many of us regionally based painters as well as, inevitably, many from the capital).  There are many that I rate very highly and several I know well.

On the floor above there was a smaller grouping of artists from the collection, where a grouping of works allowed more in depth study.  Robert was amongst them with a group of portrait studies that looked very handsome, their meticulous considered style suiting the juxtaposition with the Judith Tucker works opposite; both in black and white but showing how material,  handling, and facture as well as subject matter can provide figuration with many moods and responses.

David Ainley, is a friend (disclaimer) but his fastidious and controlled abstractions build over time to something quite transcendental and luminous that I believe show immense quality.  James Quin is an artist I’d not previously seen but I loved both his picture in the collection and his reflections on Las Meninas that made up his contribution to the upper floor show.  A different approach to Ainley but an equally intense luminosity to the work.  I’m guessing that – perhaps – James will be represented in the forthcoming Enough Is Definitely Enough  if not he jolly well ought to be!

What of Gdansk itself?  Well it was one of the worst hit places in WW2, indeed it was the location of the commencement of that ghastly conflict and is now home to the huge and monumental museum dedicated to it.  As a consequence much of the centre of the city is rebuilt but contrary to what might be expected of somewhere that has spent much of its post war within the ‘Iron Curtain’ it has been (and as far as one could deduce continues to be) done with great sympathy for its longer term heritage – particularly its role in the Hanseatic League.

Of course driving out to the coast (Gdansk is the south side of the ‘Tri-City’ that also comprises Sopot and Gdynia) the soviet era concrete apartment blocks begin to appear but then they too are subsumed into a more vernacular architecture that in Sopot spoke to me at least of seaside grandeur across much of Europe (though here much less faded than to the west).

So Gdansk turns out to be quite an experience – the centre a thriving and bustling place with many interesting and lively tourist attractions and an excellent cuisine (our particular recommendation is Bowke) but of course Poland is still a relatively poor central European country.  Perhaps it was that aspect that led me to choose to photograph it in B&W so here is the centre of Old Town in full colour that I imagine is how the tourist industry wants it to be seen!