It’s been quite a while since my last post…more pressing matters plus a short holiday has meant scant opportunity to do so.  But I’m also increasingly aware that finding anything worthwhile (to me at least) to say gets harder over time especially as, several years back now, I decided that only painting matters would be discussed here (and I’ve managed to mostly stick to that).  So here’s the thing…does time away in other environments affect the outturn of works initially influenced by other impulses and locations?  Here’s a Wonky Geo picture (No. 47, if you’re keeping count) that, as regular readers will know, comes from an enormous stack of them that have been on the go, on & off, for several years now.  But I just decided it complete, with additions of the past few days since a week in Italy…?

Well the benefit of a holiday is freedom to do as you please. So I’m revisiting my forty year old technique of oil in canvas…only this time around it’s being used on strips of canvas. 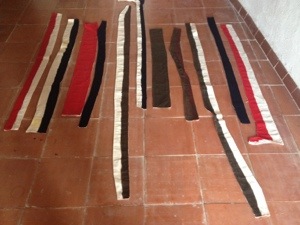