at least I’m not spending cash during ‘lockdown’…rather revisiting and reworking stuff I’ve had kicking about the place.  For example there’s my large series of TFTLR that have been ‘repurposed’ (what a ghastly word!) as Paintings Standing Up.  I’m also unearthing the ‘failed’ pictures on paper from my earlier virus series and jollying them up to show a tad of insouciance in the face of the you know what…

However anxious to please I’m putting this latest canvas, an outlier from my Lunar Pulls series, titled On The Margin after the quotation utilised in it.  Taken from a poem of the same name by David Wright.

It’s earliest iterations were less exuberant especially as regards colour but in the current circumstances a brighter palette seems a good idea.  Wright is much under rated I reckon…and the poem referenced (of which the text utilised is simply the opening stanza) is a long peroration on art and life encompassing references to the author’s profound deafness) is most excellent.  Take care of yourselves and keep washing your hands folks. 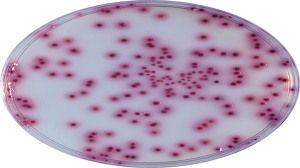 And so another year is past…and although it was a reasonably busy one I’ve always the feeling I could have done more.  I’ve have liked to won the opportunity to make the table top works I proposed for a local museum competition for one thing – I was taken with the idea of stripping down the imagery of the viruses in Epidemic! with imagery taken from bacterial cultures…like Salmonella (above)…they would have been different and I suspect more challenging pictures to make but fun nonetheless.  The project called for work to sit inside glass table tops and I thought to jolly to put salmonella right under patron’s noses.  But later this year our merry band of creatives at Harrington Mill are taking over the local hospital art programme so maybe I can take a shot at the idea then!

I am happy with the work that will be titled Full Metal Jacket that I’m being invited to put into a show in Cardiff in February (I think)…that calls for paintings that draw inspiration from other cultural contexts.  These pictures are as always with me pretty resolutely non-figurative but do take the work of Vietnam War reportage photographers as a starting point. 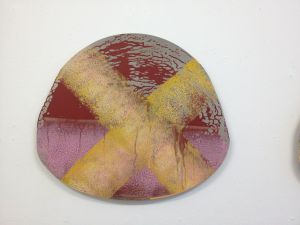 Those are but two things I know are on the horizon but other than that it’s pretty much a blank canvas, both literally and metaphorically.  Good – it’s fun when you really don’t know how it will pan out…I’m looking forward to it with some relish which is how it should be. 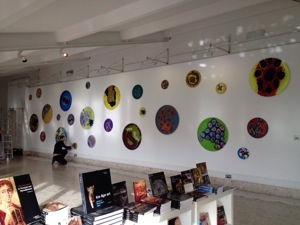 Having had a little time to reflect on my work – Epidemic! – now on show at the Lakeside in Nottingham I’m thinking about the idea of spectacle in contemporary art practice. Of course spectacle has been around for a fair old while…Michelangelo up on that ceiling and all those baroque and rococo carry ons…and coming nearer to now there are plenty more examples…the Tate Turbine Hall has seen plenty too. And before anyone points out the obvious, I’m aware that my work doesn’t have that much spectacle to it other than its a pretty big wall and the manner in which the 26 pieces are arrayed across it suggests it should be read (at least on one level) as a whole. Nonetheless I’m intrigued by the idea of spectacle and this was pointed up recently when we made a trip to Waddeston Manor in Bucks. Now the Prof doesn’t really do Christmas but if he did he’d do a Waddeston Christmas… 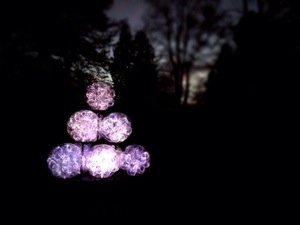 And very much part of the festive offer is a show of outdoor light pieces by Bruce Munro. My instinctive response to these was to be rather sniffy…after all this kind of ‘obvious’ spectacle in the setting of a grand country manor is likely to infuriate the art cognoscenti. Rather in the same manner that the UK art elite has done with Andy Goldsworthy. But the distance of travel involved in consideration of – say – a Richard Long in relation to AG is no greater than the distance further out to a Munro. What exactly makes a stone circle less obvious than a pile of plexiglass balls? I imagine the answer would be part context and intention. But of course for all those viewers outside of the ‘know’ merely passing by this counts for very little, after all they only have their eyes and instant response to go on. Its making me think again…not just about Epidemic! but also about my future activity…I may be wrong but I think there’s some juice in spectacle for my painting right now. 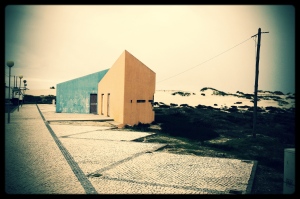 From arriving home from Portugal to hanging my exhibit at Lakeside there doesn’t seem to have been time to breathe!  Or to reflect….and cogitation is a much undervalued commodity in modern life it seems.  It was often something I complained about whilst working in Higher Education where a deal more cogitation would have often saved us from numerous cock ups and contra temps.  Anyway today is an opportunity to sit back a little and savour what we saw on our all too brief trip and to contemplate a little now that Epidemic!/Black North is on the walls in the Angear space at Lakeside.  I need to pay tribute to Neil and his staff who were highly professional, smoothly efficient and helpful in a way that a lot of other bigger art spaces in our region could learn from (and further afield for that matter).  In particular Freddy & Luke got the pieces up quick smart. 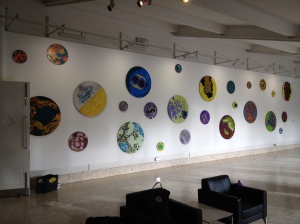 I’m happy with the way it looks and relieved it worked out pretty much as I had intended.  I just hope to get some positive feedback on a project that, one way and another, has dominated the past twelve months and more.  If you don’t know already it runs from now until 2nd February 2014 and there’s a viewing evening on Friday 22nd November from 7pm.

I have been to the Porto area of Portugal six or seven times now and it is always a pleasure.  Fresh insights occur every time and this time around was no exception.  I made a project several years back on the extraordinary (to me at least) space between the beach on the Atlantic and the lagoon.  The photo here shows the toilet block (!) near the beach at just about the narrowest strip (less than a couple hundred yards) of it at Costa Nova.  I am always fascinated by the way in which the salt air affects everything on the one side and the lagoon seems to protect everything on the other.  Another trip took us up into the mountains around Arouca…I’d been up there further north before but this time the terrain was more rugged and exposed (reminding me a little of Dartmoor in Devon).

On the way up we saw some lovely landscape and on top it was glorious until the mists and rain came in…just in time to prevent me from photographing the largest waterfall in the country…I got these shots, one of which shows the information board…! 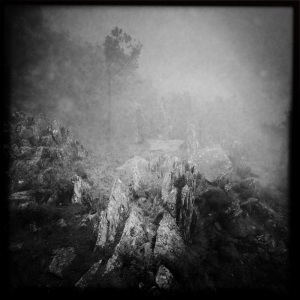 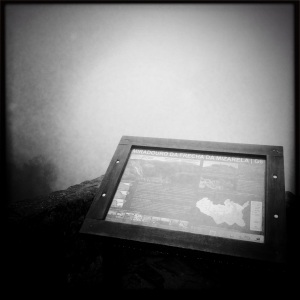 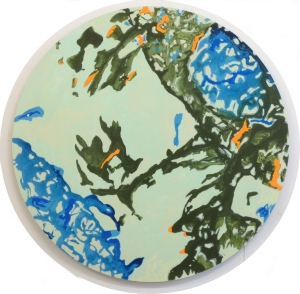 Its getting closer – the ‘proper’ showing of the Deadly Delicious paintings is coming up fast now.  I’m just trying to decide how and what is the final resolution of the works that will comprise the exhibition that I’ve titled Epidemic!  I hate this point where you simply have to decide that works are completed, for me whilst they are still in the studio I can convince myself that they will be so much more dynamic, exciting and complete once they are finished…but the truth is somewhat more prosaic.  And the other reason they need to be finished is so they can be properly photographed…these phone images are fine online but for print purposes it has to be RAW files shot on the Canon and then ‘tidied up’ in Photoshop.  So plenty to do even after they are ‘complete’