I’ve been rather busy putting this together – an exhibition of the work of six artists focussed on the observation of folks as they go about their day to day lives.  It opens on Thursday (2nd November, 2017) at Déda, the dance dedicated arts centre in Derby from 18:30 – if you can come along we would love to see you.   Its been a voyage of discovery for me personally, not least as figuration is very much not my usual turf, and four of the six artists I’ve chosen were not known to me before I started to put it together. Of the two I did know its been a real pleasure to be able to share some of their work with new audiences as it is my view that they deserve to be admired widely.

Ellie Young from Cardiff is one of those I found out about as I searched for painters whose work is firmly focussed on observation.  In her case it can be very direct (she has undertaken a project making 15 minute portraits at a local centre) but also from photos and film, indeed film is a great love of hers and though there are elements of caricature in her work it is fleeting impressions and glimpsed moments that seem to especially inform her work.

Sue Stone (based in Grimsby, Lincs.) is another whose work makes extensive use of photographic sources though these are often wrestled into fresh configurations in her beautifully constructed pieces that combine exceptional qualities as a ‘textile artist’ with painted elements.  Her interests are in the wider realm of how memory plays such a vital part in our reading of images of people.

An element of nostalgia might be read into the paintings of Helen Latham from Cambridge and they certainly have a very particular mood but often the subjects are very much of our time, and there are, to my eye at least, disturbing undercurrents in several of the images.  Taking us, quite literally, to another place is the work of the painter, Anna Pinkster, whose acute observations of people going about their daily lives in Vietnam are imbued with a freshness that belies their carefully considered realisation in her studio in rural Somerset.  And their marvellous vitality leads back into those artists who work I did know.

Firstly Jackie Berridge from Southwell, Notts. is an artist I’ve known for many years but over the past decade she has become both the exceptional draughtswoman she always was but also a painter of rare distinction.  In her work a highly original cosmology exists in which episodes from childhood are interspersed with mature reflections on the human condition in paintings or, as here, drawings that are, on another level, simply lovely to look at.

So back where we began the drawings of Paul Warren take us into yet another personal universe.  And this is where my quest started because my whole impetus for the show came from wanting to see more of Paul’s work in the public realm.  His particular – and peculiar – vision is something he shares with the artist Ian Breakwell & the artist/musician Kevin Coyne, both school friends back in the 1950’s at the Joseph Wright School of Art in Derby.  In their world view they forensically examine the human condition, all its foibles and frailties, but with a certain affection and – most crucially – a wicked and delicious sense of humour.  And if this show does nothing else it will expose and celebrate Paul’s contribution to this remarkable triumvirate of artists that came out of this city in the 1950’s.

So shortly we are off to the Shetlands, to Scalloway and to The Booth.  For a month we will be living and working there and it is always tricky on such an expedition deciding what to take by way of materials.  You don’t want to be too prescriptive on the one hand but properly equipped on the other.  Especially so as material supplies may be tricky there (though of course it might be much easier than I’m imagining).  Nonetheless I have drafted a sort of plan!  Some time back I was rather taken by a small clutch of Knitting Sheaths that reside in the museum there – I’m hoping to see them during our stay. 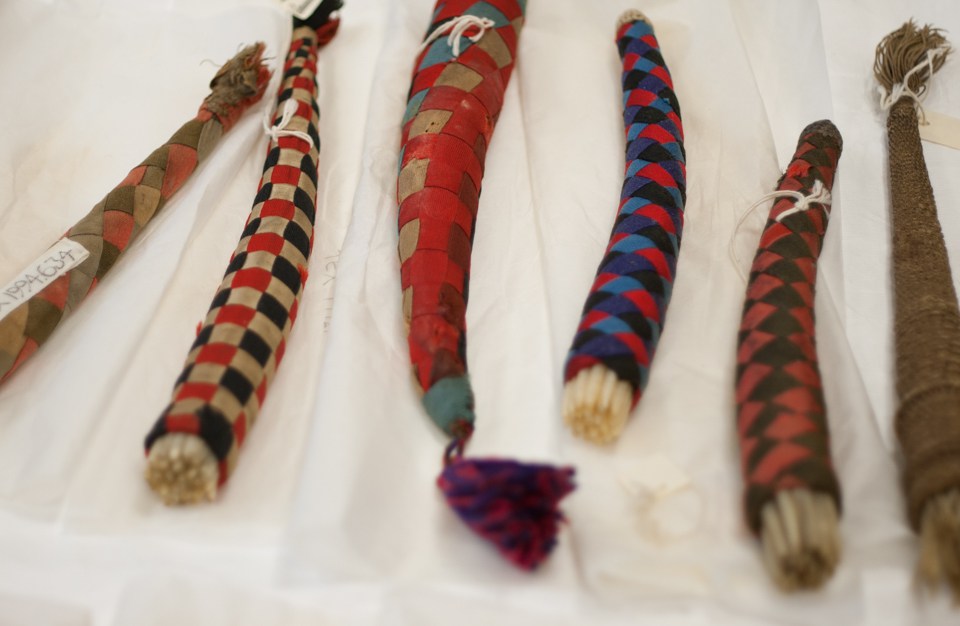 And I’ve riffed on them over the past few months in photoshop…so I have at least the beginning of imagery that hopefully relates to my Wonky Geometry.  Then a trip to the Ashmolean a while back with my pal Simon to see the wonderful Raphael drawing show had us wandering through the room of Japanese scrolls – kakejuki…brilliant!  Just the thing for a trip away…paper based and roll em’ up to transport back easily.

I’m wondering exactly what may be the unintended consequences of working from my mashups of the photos I take in preparation for my series Playground of the Midlands.  Perhaps it should have occurred to me a lot earlier.  After all I started playing around with photographic source imagery back in the 1990’s!  But in all honesty I’d not really thought it through much until earlier in the week.  Stepping back from one of the canvases the choices of elements were shockingly clear – yes – you could see what it was! Usually my mashing up, or colour choices  or plain cackhandedness takes care of any original referent.

One of my many painting heroes is Thomas Nozkowski. I like his clearheaded and unfussy approach to the business of making a picture and the plain commonsense  of much he says about it.  He is rightly admired for his certainty that everything he does is grounded in real world experience.  You get a really honest insight into his process from these  videos made by his son – here’s the other – where he expands on the idea of how the work evolves. I guess one of my reasons for liking his work is my similar idea of how to construct a picture.  In a 2015 catalogue he talks of  his work becoming “more open ended. That’s to say initially I prided myself on sticking close to my original source material…but I’m much more interested in all the evocations and echoes and implications…so instead of a tight little knot, I think it’s now something that’s a bit more open for interpretation”.   I’m wondering whether or not I may allow some movement in the other direction – or should I – as Thomas suggests – work harder at the taking out rather than the letting in?

So that’s one conundrum going around my head (where a gummed up ear is making it a rather lonely and frustrating place right now).  Another that’s been bugging me for a while is the point of all this anyway.  I mean doing what I’m doing right now…’social media’ that as David Byrne recently suggested may actually do as much harm as good.  After all if there’s a point to painting it has to be in substantial part the engagement with the actual object.  It’s not lost on me that both the bodies of work I’m particularly focused on right now have no obvious outlets in the real world – and that is equally frustrating too.  Maybe the memo to self is to start searching for opportunities to get the work out there…though after I have resolved it all!

It’s the last trip for the Playground of the Midlands project that started the day in Syston before moving onto Seagrave and lastly Walton on the Wolds (though my estimable partner in crime ducked out of this one).  Some might think that we were fairly eccentric in this endeavour though it doesn’t seem to have caused too many raised eyebrows as we, two loud, large, late middle aged, men with cameras, cruised about the Charnwood borough (other than crashing the Thurmaston Parish Church Coffee morning a couple weeks back).

Anyway we are done now.  And of course there have been several of these signs dotted about the borough.  They have a certain charm and usually feature fairly bland and obvious imagery as above…but hang on a minute…whats that chap doing on the right hand panel above?

I think we should be told…why its Montague ‘Bertie’ Bird.  The sometime Vicar of the parish who around the turn of the twentieth century developed (excuse the pun) a passion for photography and…a habit of doctoring his images!  Well that is eccentric!

but first a few more Ragbags!

I was very pleased to receive a pre-publication copy of Making Photographs: Planning, Developing And Creating Orginal Photography by Mike Simmons as I’ve the image above reproduced in the book.  It was a bit of a shock to realise that it is over seven years since I embarked on my photography Masters course and nearly that since I took the picture.  I found going back to college (after a gap of more than thirty years) a lot of fun and I learnt a great deal from Mike, Paul Hill and Greg Lucas who taught the programme.  Although I’ve used photography since I was 17 until the course I’d always seen myself as someone who ‘took’ photos (and, as a painter, often abused them badly!) rather than someone who ‘makes’ photographs – pretty much the basic thesis behind Mike’s book.  I’d recommend it to anyone interested in developing their creativity as a photographer (but I guess I would, wouldn’t I!).

It’s interesting that the use of photography as an artist is very much in the creative community at the moment with the prosecution of Luc Tuymans just the other day.  Of course the case revolves around appropriated images rather than self originated but, like many others, I’ve done my share of that too over the years.  Thinking through the case makes one realise how the explosion of the mechanised  image over the past – nearly two hundred – years now, and especially the exponential growth since digitisation has smashed the distinctions to smithereens. I play about with both drawn and photographed images on my iPad all the time…and am thinking of making a portfolio of some of these at the moment…and it occurs to me that amongst the sources I’ve plundered are colleague artists, my students and famous artists and photographers whose work I’ve seen on my travels over the past few years.  Ok I do ‘bowdlerize’ them more often than not but nonetheless… And I’ve been using other people’s ‘stuff’ ever since I was a student…

Adrian Searle makes a good case for the absurdity of the decision in The Guardian but maybe misses a serious point…after all the young Belgian photographer, Katrijn Van Giel has her copyright too.  Ok Searle asserts that the painting is quite different to the photograph…and of course it is…as long as it is viewed as a painting.  But of course (as the work is in a wealthy American businessman’s collection) most of us only get to see the image…and are just as likely only to ever see the image of Van Giel’s photograph…indeed nowadays its likely Katrijn has never actually made a photograph of the image…(ok maybe not until now!).  Now the image is still ‘different’ to a degree but the subtleties Searle ascribes to it are pretty much lost on the screen that most of us will view it.

There is of course one simple reason why this all matters…money…and one of the things it points up I think is the relative ‘value’ put on traditional ‘art’ and ‘photography’ – those contemporary artists and commentators ‘outraged’ by the judgment are, I suspect, simply unprepared to accept photographic reportage as ‘art’…they hanker over some transformative mojo to turn what they see as base metal into gold.  Heck I may even be one of those myself…I just don’t know anymore?