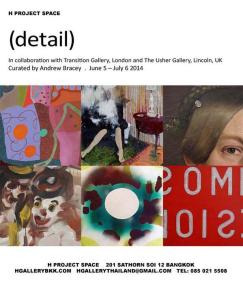 I mentioned here a few months back that I’d been invited alongside many others to be a part of this show (detail) that opens soon in Bangkok, an intriguing idea that may well be more revealing of current painting practice than most.  The exhaustingly energetic Andrew Bracey is the curatorial brains behind it and deserves considerable plaudits for pulling something of this complexity together.  If you’ve seen any of his other projects you’ll be familiar with his indefatigable commitment to seeing through work schemes that would make most of us blanche but that often result in quite startlingly original and delightful outcomes.

(detail) was in my mind last evening when looking at Jackie Berridge‘s exhibition at the Lakeside in Nottingham.  Indeed its hard not to be drawn into the myriad details in these large new canvases that take her (now) familiar (to those of us who know her previous work) creatures into a host of new adventures in a fabricated landscape quite unlike any other I can think of in current figuration.

There’s a lot of painting about that deploys the full gamut of painting tropes and techniques (indeed there’s quite a bit of it in Nottingham at present) and some of it is very good indeed.  What there is less of is open ended narratives around figuration that are wedded to the same sets of conventions and it is here that these paintings really make their presence felt.  I struggled as did my good friend David to think of any recent or current work that was mining the same seam and (without being too immodest) we have seen a lot of stuff between us.  I eventually came up with some thoughts around the 70’s and 80’s School of London where Hockney was constructing brightly coloured canvases of the Californian landscape or RB Kitaj was compacting space in a brilliant picture such as If Not, Not.  But neither of these are precedents for these new paintings with their incidents and adventures of a cast of curious characters in a landscape where the teletubbies are as likely to come over a hillock as anyone we might recognise from our own worldscape.

I’m always drawn back to the playground of my early childhood with these pictures (I like others have been more familiar with these images as large scale drawings up until now) but with the painterly elements of colour and handling we seem to have moved into another even more dreamlike (and sometimes nightmarish) vision.  The colour palette is especially rich and in a warm early evening spring sunlight it was set off to particularly good effect but it only serves to lure the viewer into an initial security that is entirely disturbed by the content, both formal and narrative.  What is really strong in this work too is the knack of knowing when to leave well alone so that painterly incident and the author’s handwriting shines through.

This is good stuff and shows Jackie’s work reaching a maturity not just as the excellent draughts person she has always been but as a painter of real authority.  I’d say you should go see it.  And as mentioned above there is plenty of marvellous detail here that would have sat nicely in (detail)…and if you can’t make it to Bangkok (!) then fear not as it returns to the UK later in the year and Andrew is also putting a website up shortly that I’ll signpost here when available.  Is God in the details?..well we’ll get another chance to make up our minds then.