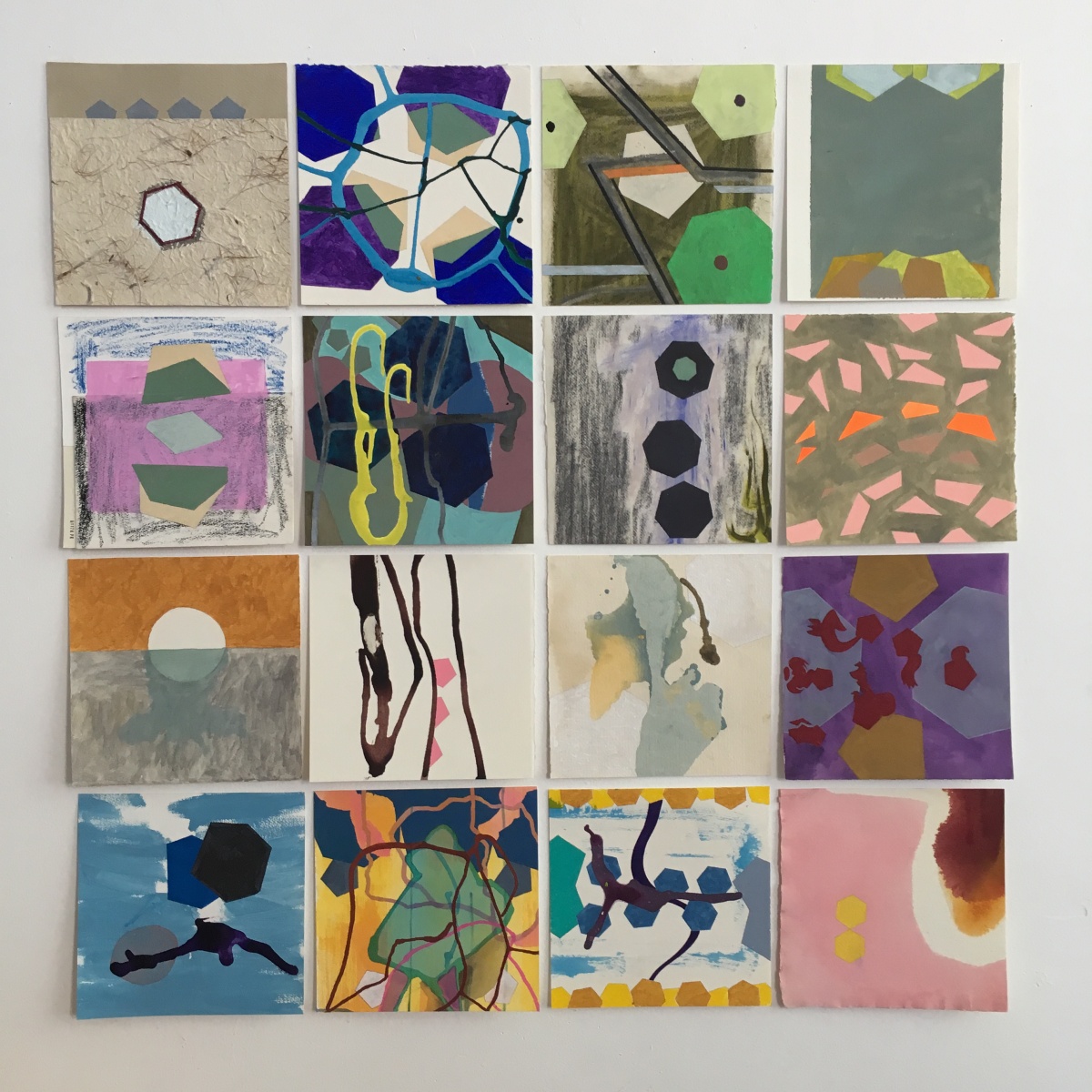 and rediscovery too…  I’ve been absent from this site for over a month I realise, making use of quite a bit of the good summer weather and being (unusually) at home to drag work out of the basement.  I have stored older work down in the dark recesses over the years despite knowing full well that the fetid conditions rapidly rot canvasses away.   Those that survive often require some restoration but its those that never got properly resolved, or where I lost interest that are most interesting.  Some remain intractable but I have found myself increasingly interested in resolving and completing others. 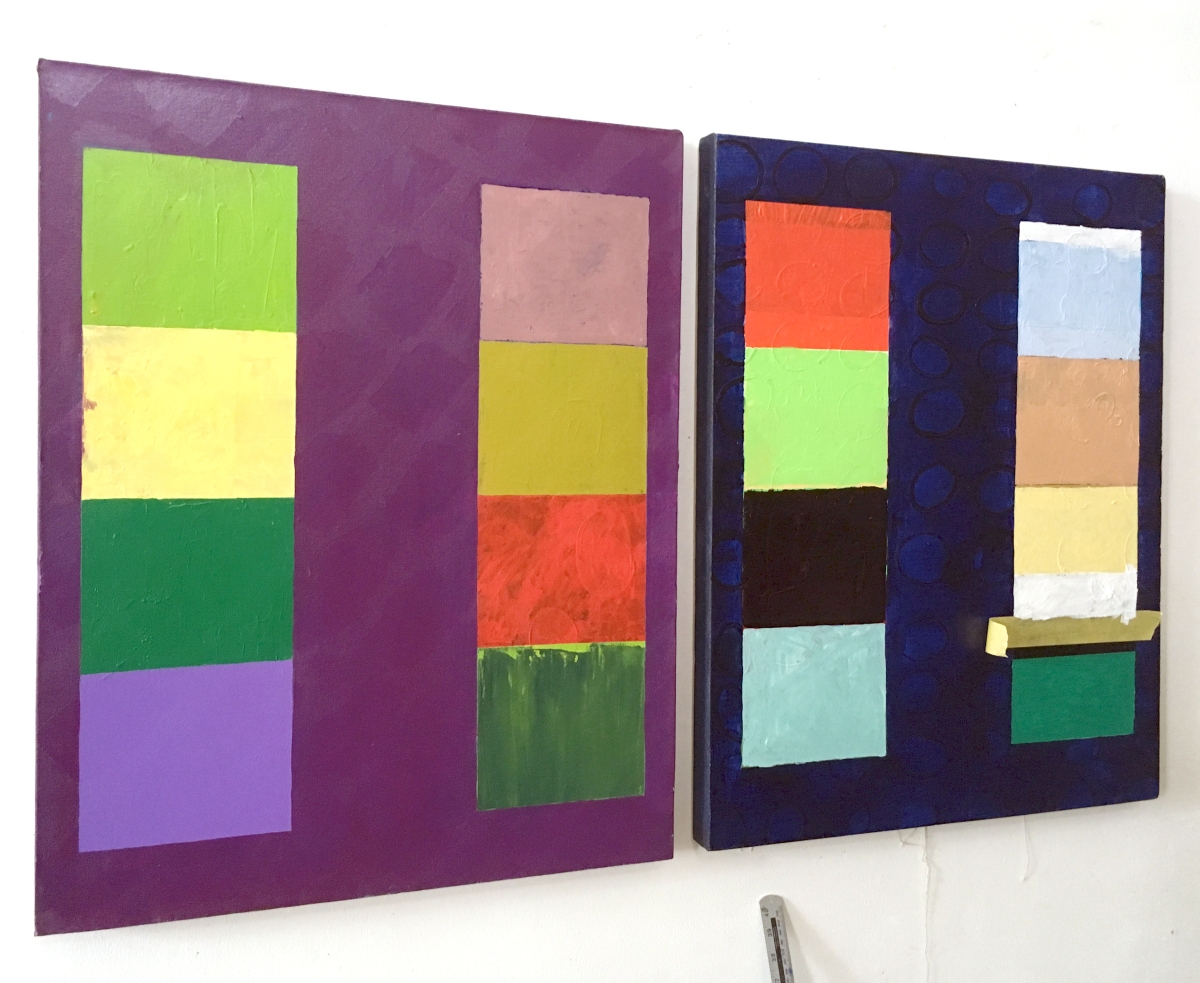 I’m looking at these two from the Conversation Pieces (part two) series.  And have decided that part of their resolution will be to join forces as a diptych where two conversations get crossed wires.  Part of the process for me is re-imagining it as I did when first working on them…around six or seven years back.  Mostly I don’t work with tapes preferring to paint to the pencil line but just occasionally with these I chose to tape up a block to get that crisp, slightly raised line. 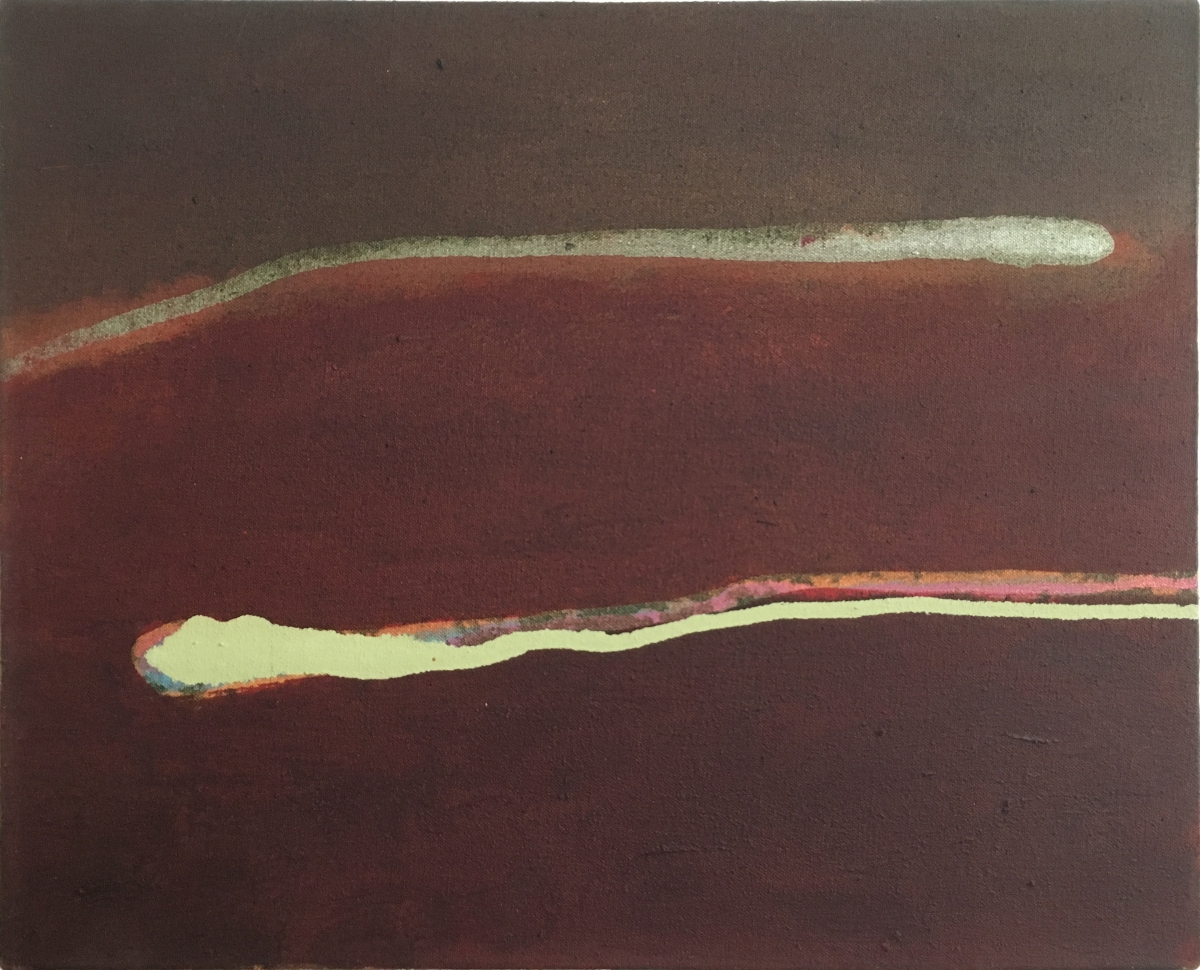 Another interesting thing for me is rediscovering old pictures I’ve quite forgotten about.  This one comes from a series made in the mid 1990’s and was the only one of a group of a dozen or so in landscape.  It never quite fit with the rest, stylistically as well as format, but only now do I realise it was a precursor of the large series of paintings that began in the late nineties through to 2004/5 and formed the backbone of a solo show at Derby Museum ‘Nothing But Mirrors & Tides’ 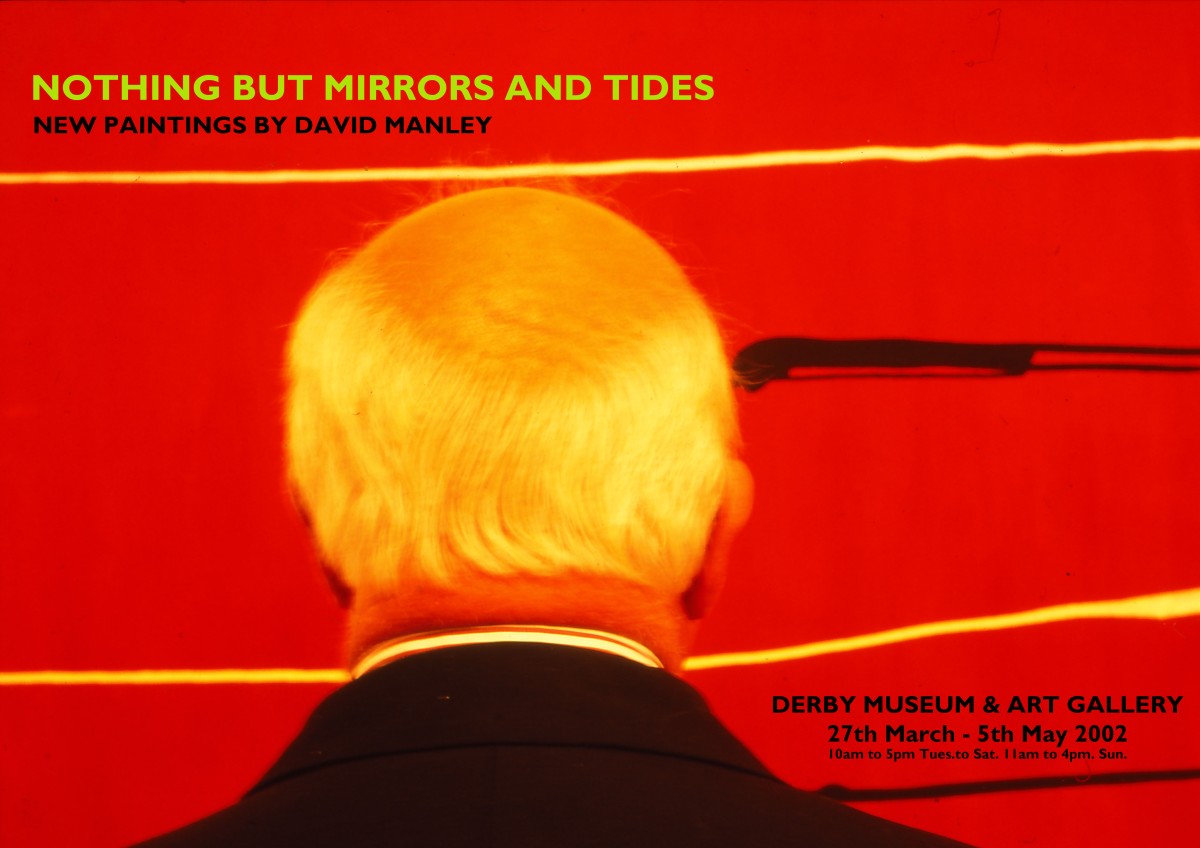 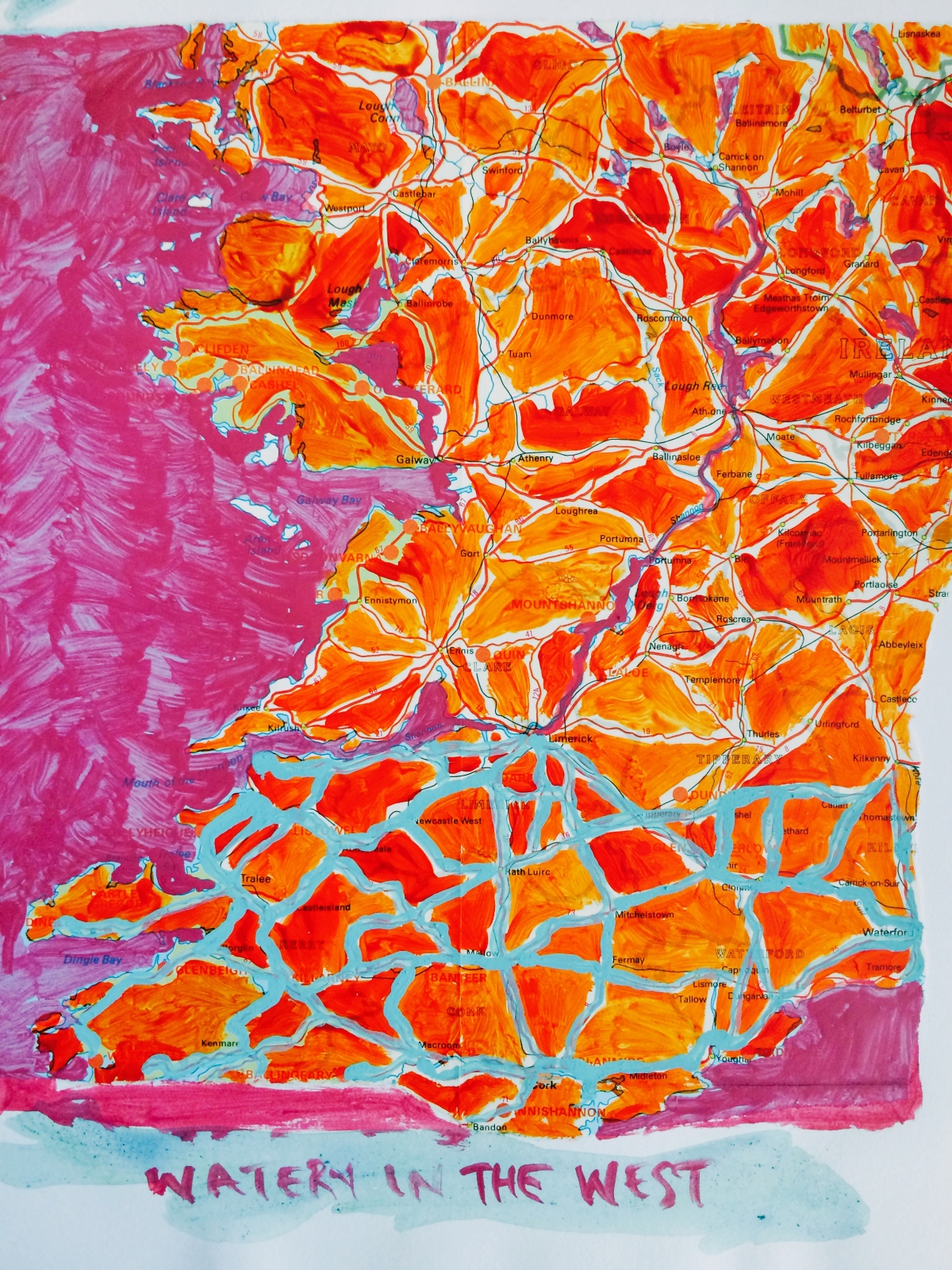 My Rough Cartography series is such a long standing practice that it seems now just habitual. Wherever and whenever I’m somewhere away from home I pick up those freebie tourist maps and once back in the studio they are pasted into one of the sketch books. Over time…lots of it!…they are gradually painted in.  Why I do it I’m not at all sure but the letter below maybe gives some kind of clue to it.

Today you would have reached pensionable age but, as things go, sadly you’re not here to celebrate. Later I will raise a silent glass for you. I remember back when we were still youngish men sitting and discussing making work, why we do it and what it means. You asked me about my peculiar habit of keeping scraps of maps in my sketchbooks and colouring them in…and us both laughing at my complete inability to explain any purpose behind it. Well I think I may be on my way to understanding now. Not bad eh, its only been thirty plus several years after all!

Its something (if I understand it properly) contained within an essay in the catalogue for Contemporary Masters From Britain – a show of 80 paintings touring China from the Priseman-Seabrook Collection. Dr. Judith Tucker suggests that painting retains a capacity to capture our attention precisely because of its materiality; its “sensuous, viscous quality” as she puts it. This is coupled in the essay with a notion of painting as “quasi-subject”; a site in which bodily experience of the artist in making the work is somehow a residue within this materiality. I think it may be at the very least something to do with these ideas that keep me, all these years later, fiddling with those damn maps.

I’m also dwelling on the good fortune that allows me to keep working and how, over time, opportunities present themselves through a myriad of circumstances. It’s in my mind because of the show just mentioned. Its been through recommendation (and I owe thanks to the talented Terry Greene for that) that I’m part of this exhibition. Other possibilities open up and suggest themselves too.  I suspect that over the past decade or so you would have cemented your reputation not least because of the way in which your last works were opening up new avenues and directions. Amongst the many things I miss is the opportunity to have argued and wrestled with these ideas and outcomes that never happened.

With affection and remembrance, 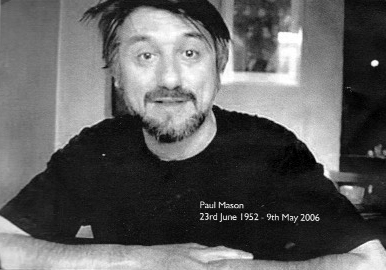 More information on Paul Mason can be found on my blog on him here.

Contemporary Masters From Britain is available through Amazon.  The show opens at the Yantai Art Museum on 7th July 2017 and runs till 3rd August before moving to Nanjing.

Terry Greene’s blog is a must for all contemporary painters! 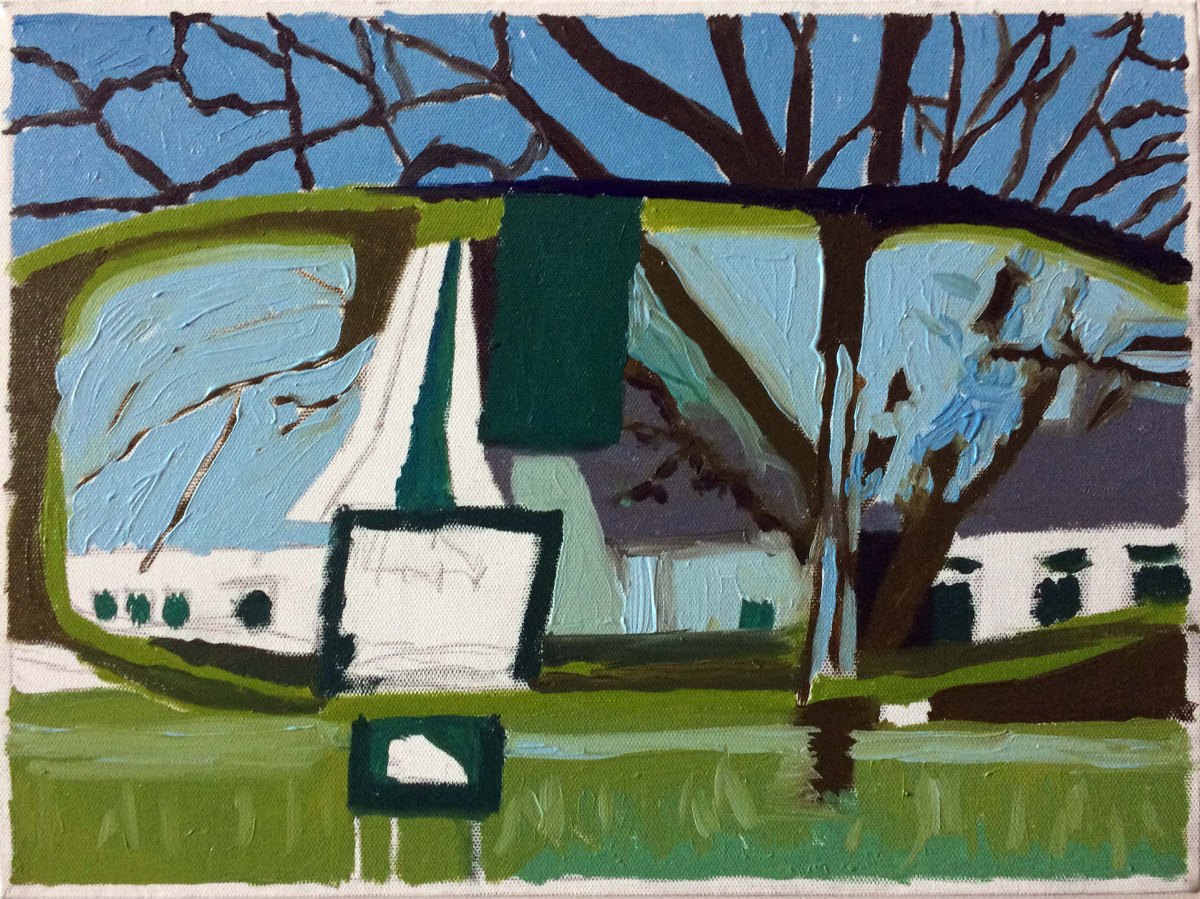 I’m wondering exactly what may be the unintended consequences of working from my mashups of the photos I take in preparation for my series Playground of the Midlands.  Perhaps it should have occurred to me a lot earlier.  After all I started playing around with photographic source imagery back in the 1990’s!  But in all honesty I’d not really thought it through much until earlier in the week.  Stepping back from one of the canvases the choices of elements were shockingly clear – yes – you could see what it was! Usually my mashing up, or colour choices  or plain cackhandedness takes care of any original referent. 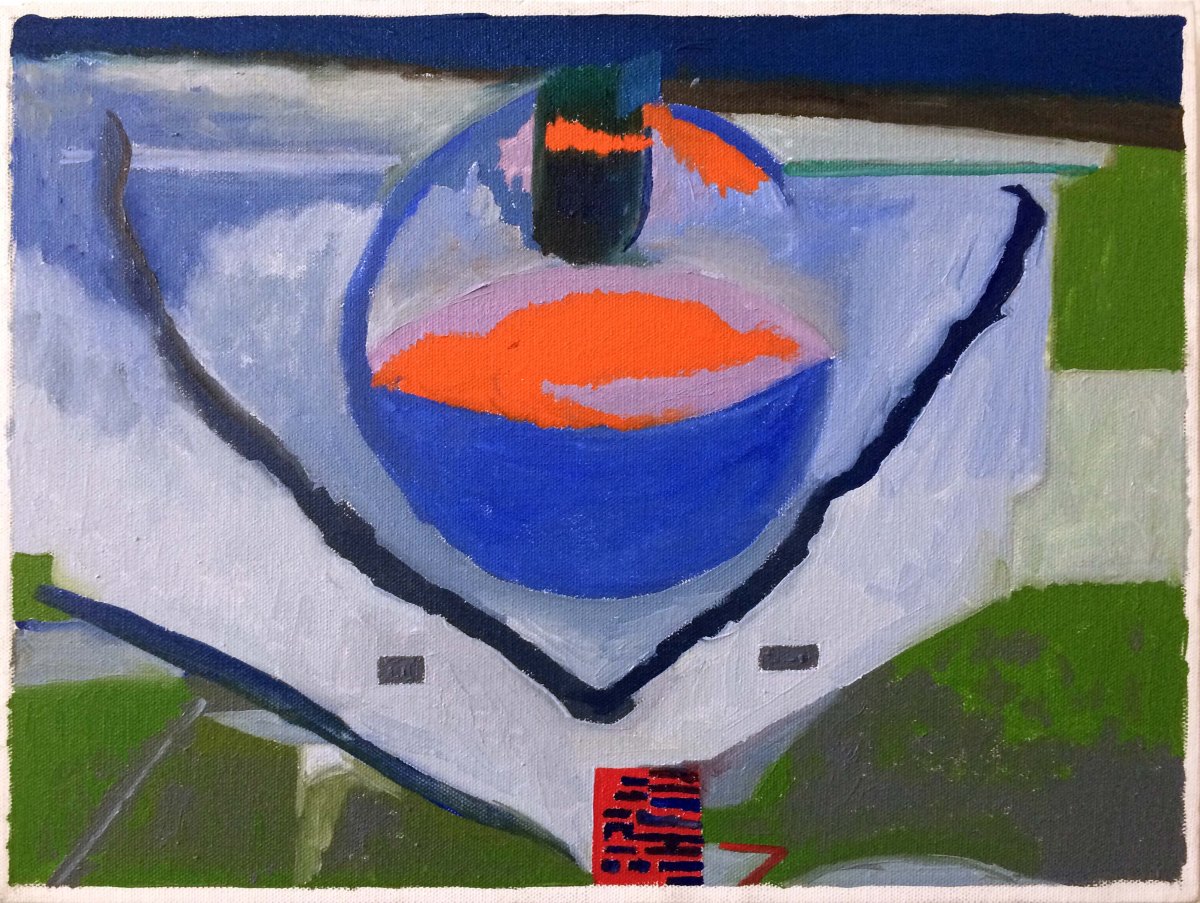 One of my many painting heroes is Thomas Nozkowski. I like his clearheaded and unfussy approach to the business of making a picture and the plain commonsense  of much he says about it.  He is rightly admired for his certainty that everything he does is grounded in real world experience.  You get a really honest insight into his process from these  videos made by his son – here’s the other – where he expands on the idea of how the work evolves. I guess one of my reasons for liking his work is my similar idea of how to construct a picture.  In a 2015 catalogue he talks of  his work becoming “more open ended. That’s to say initially I prided myself on sticking close to my original source material…but I’m much more interested in all the evocations and echoes and implications…so instead of a tight little knot, I think it’s now something that’s a bit more open for interpretation”.   I’m wondering whether or not I may allow some movement in the other direction – or should I – as Thomas suggests – work harder at the taking out rather than the letting in? 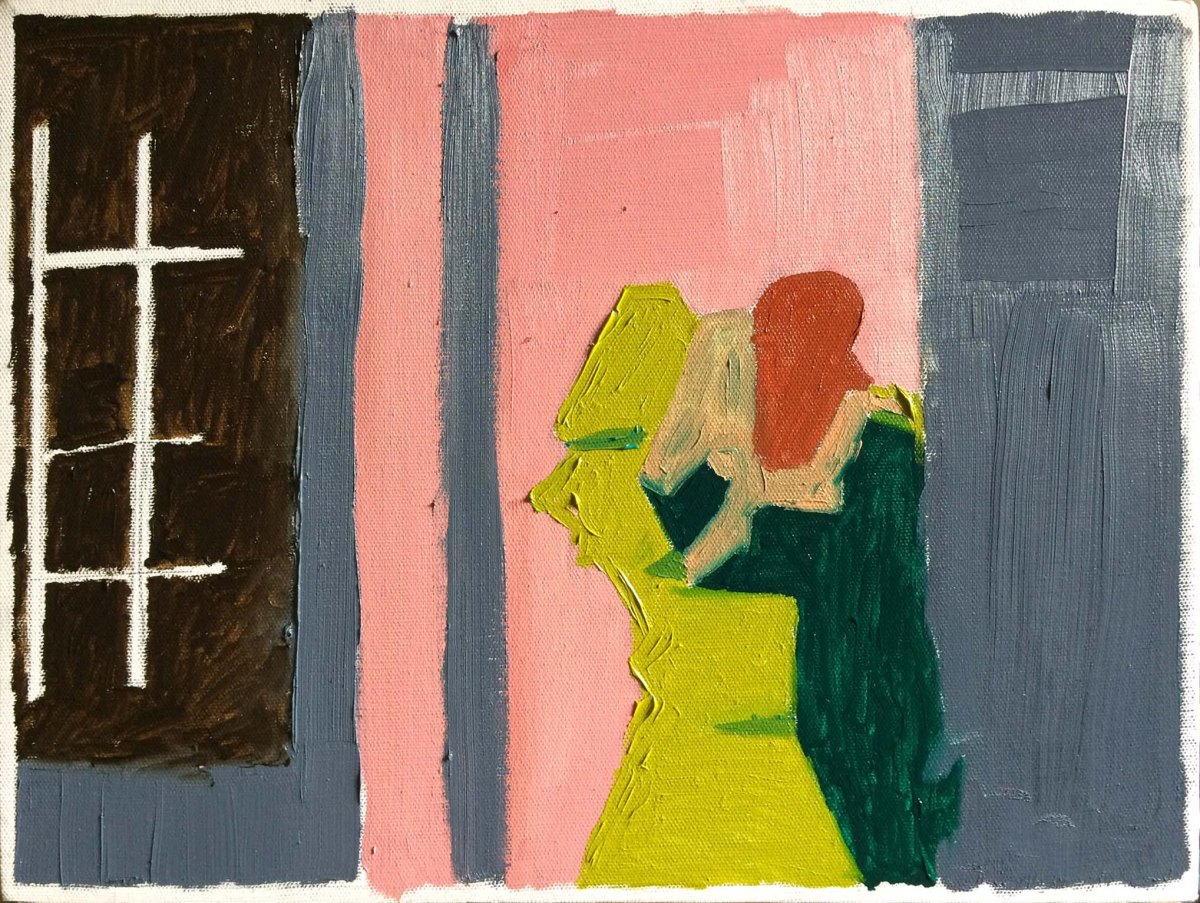 So that’s one conundrum going around my head (where a gummed up ear is making it a rather lonely and frustrating place right now).  Another that’s been bugging me for a while is the point of all this anyway.  I mean doing what I’m doing right now…’social media’ that as David Byrne recently suggested may actually do as much harm as good.  After all if there’s a point to painting it has to be in substantial part the engagement with the actual object.  It’s not lost on me that both the bodies of work I’m particularly focused on right now have no obvious outlets in the real world – and that is equally frustrating too.  Maybe the memo to self is to start searching for opportunities to get the work out there…though after I have resolved it all! 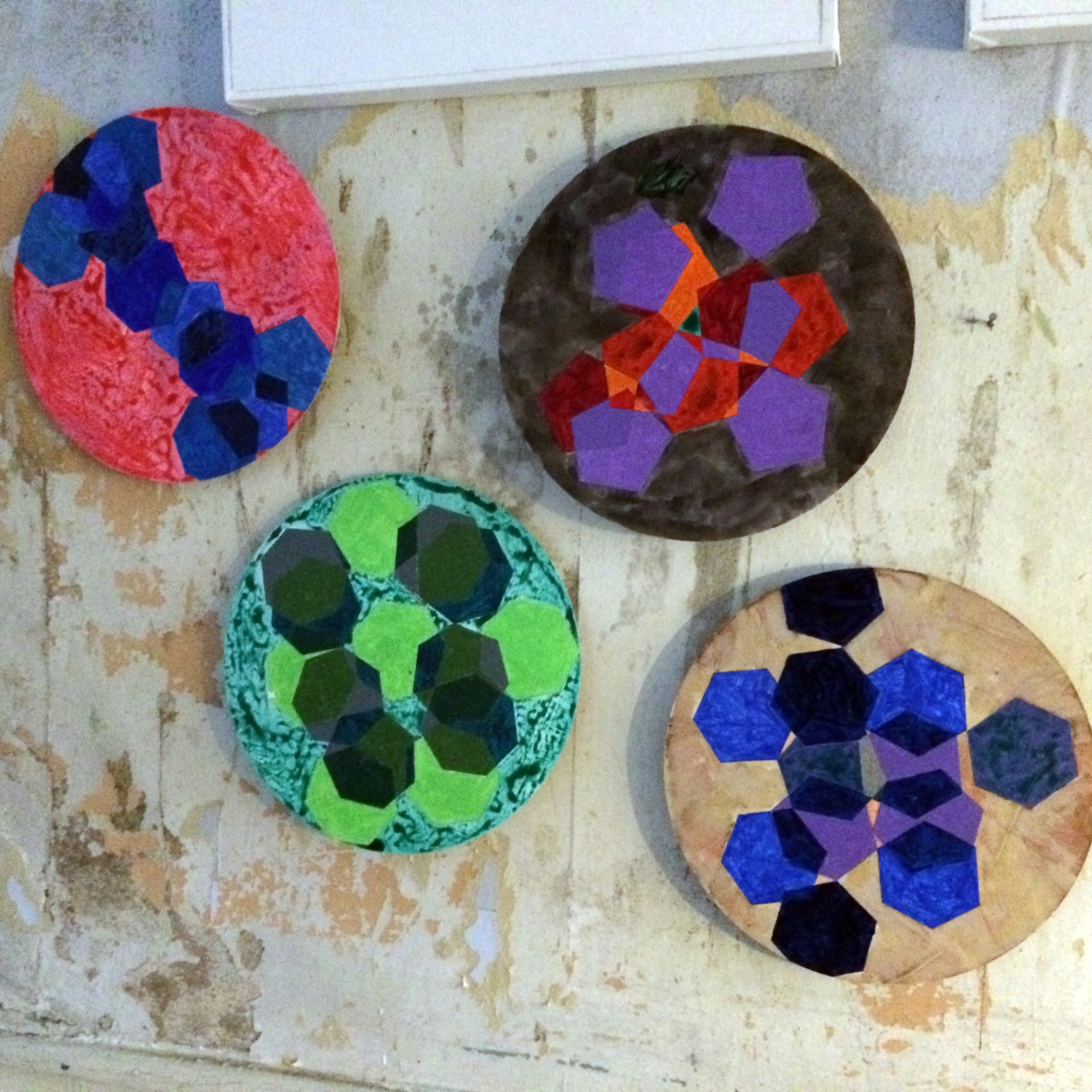 between different projects is often difficult to divine. There are times when the focus is clearer and times when its not. Its one of those not times. There’s a suite of small wonky geometries on the go. They are still at the early stage of ‘roughing out’ – the broad structure is in place (further variations on the 5/6/7 sided figure interactions) but the colour combinations and variations are, as yet, very unclear. They are amongst a group of panels to be offered for selection for a show entitled Colour Bliss so there’s a challenge! 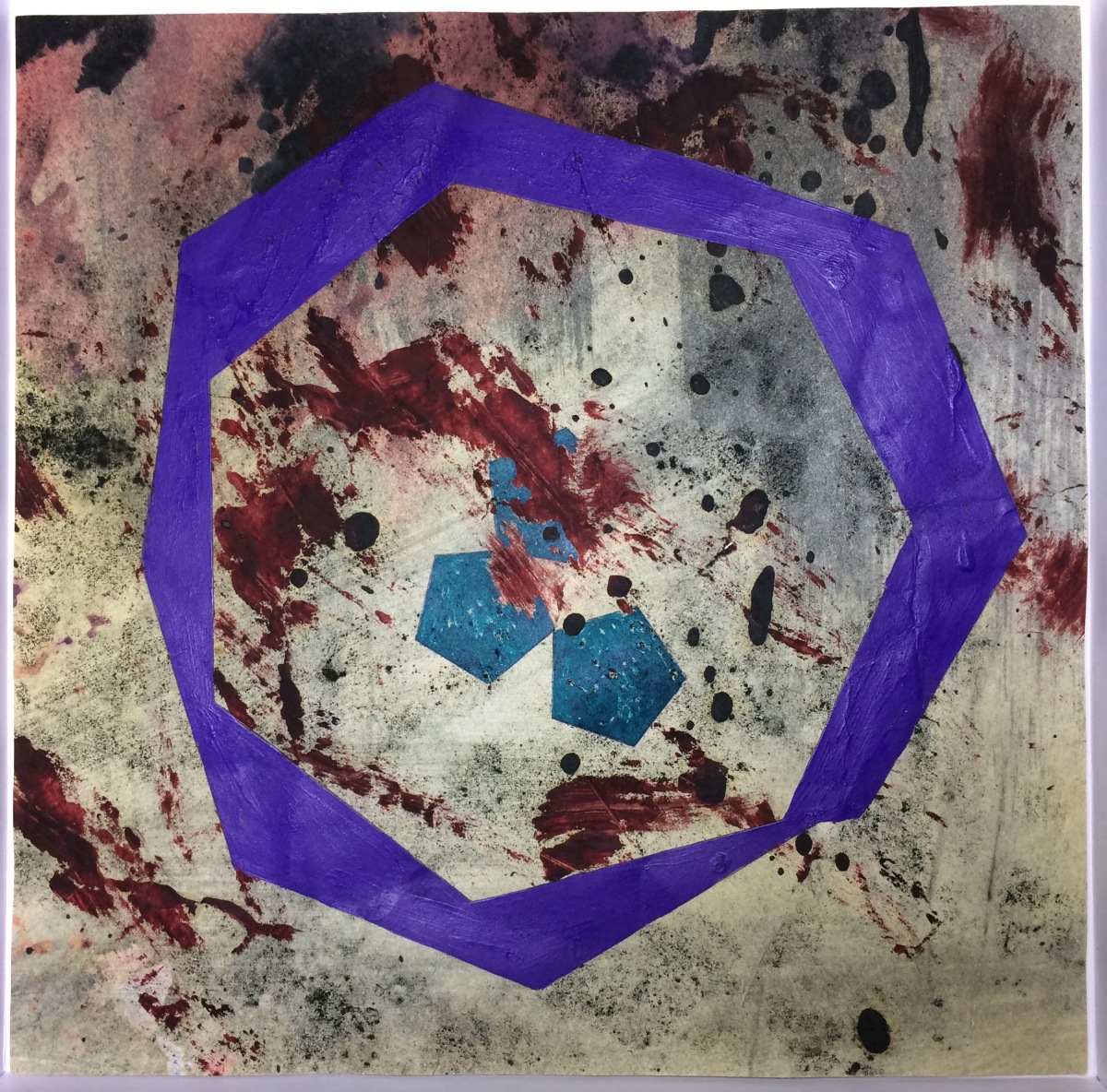 Alongside these I’m playing with a collection of over 100 small paperworks – that are even more wacky variants of the same repertoire of basic regular sided shapes expanded to include 3/4 sided appearances and a host of other marks and forms. These are pretty much just for fun and to keep myself busy when the other project gets too tricky.

There’s actually another even more mindless long term project that uses up quantities of mixed colour so as not to waste it. And when I say longterm I really mean it. I guess my casual interest in colouring in maps (!) started in my early teens. On one of my first trips abroad (a scout jamboree in the Netherlands) a pal asked me why I was clutching a sheaf of maps (picked up in various locations) on the return journey. I couldn’t answer him satisfactorily but it began a habit that has lived with me through over fifty years now. Some time later…exactly how long I’m not sure (though by the time I started my Foundation studies)…I began in idle moments (and to keep me engaged in some activity in the studio) to fill in these having glued them into sketchbooks. Goodness knows how many there are now but its a lot. Some time back I actually collated a few into a pamphlet that I called Rough Cartography. Here’s one that has been mushed up in the last couple days…it amuses me to think about why I do them and whether I’ll ever use them for any more elevated artistic purpose. I am also (obviously easily pleased) amused at the way the locations are obliterated by my actions…if they were shown would others be able to recognise them? What about the one here? First answer received gets a copy of Rough Cartography signed by the artist!  Well it’s Christmas innit!