I was saddened to hear of the passing of Barrie Cook recently.  Like many another painter he ought to have been more celebrated but we’re not good at recognising the worth of  them here in the UK.  I didn’t know him well but I do recall two occasions, one many years back, one more recent, when he was much in my mind.  The more recent happened on the occasion I wrote about here.  For in this most unlikely of locations I passed round a large free standing wall in the middle of the upper main gallery to be confronted by a fine example of Barrie’s spray canvasses.  How he had come to know Piet Moget who had assembled the amazing collection there I don’t know…but Moget (and Barrie Cook himself) were well travelled and connected.  Sadly I didn’t get an image of the work on the day.

The earlier occasion speaks volumes for the warmth and generosity of the man.  He had just taken up the post of Head of Fine Art at Birmingham and had called into the Ikon where I worked.  I think he’d had a meeting with the boss but as he was leaving he mentioned that someone on the staff had told him I was a painter.  We exchanged pleasantries but then he suggested that if I was finishing work shortly did I fancy a drink?  We ended up sharing a couple pints with him looking over some slides of the work I’d just embarked on and offering encouragement and sound advice.  He also gave me a copy of his small catalogue from the recently completed Gregynog Fellowship that I’ve treasured over the years. 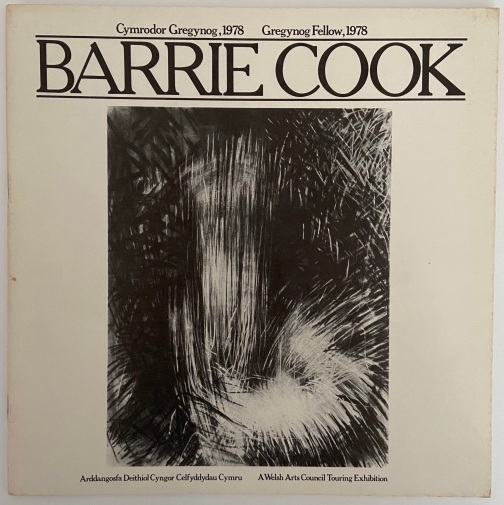 I haven’t seen him in many years but it seems he was still working away daily down in Cornwall and had a good life, and that is heartening to know.   A talented artist, a good teacher and a smashing bloke.