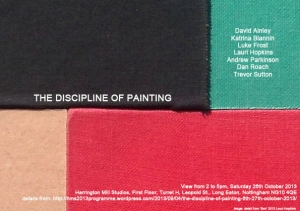 is the first of two abstract painting shows that are a part of my year of curation for Harrington Mill Studios.  I am very excited at the opportunity to put some of the very best artists working in non-figurative painting on display in our modest exhibition space.  Not least from the purely selfish point of view that I will be able to study them up close for several weeks!  One of the many joys of being able to mount these shows is to bring together work by artists I have met and in some cases know well with those I have admired but never yet had the pleasure of meeting.  It also gives me an opportunity to place a single work of mine from a particular point in my life as an artist in the company of artists that, in all honesty, I’d never have had the opportunity to do otherwise.

Alongside the show itself I am creating a small display made up of a few single works as a kind of ‘control group’ borrowing a bit of scientific jargon*.  In my control groups I am putting myself in some very elevated company indeed…but then again it’s my show so it’s only me to blame if I make a fool of myself.

I’m gradually gathering together information on the first show – entitled ‘The Discipline Of Painting’ here.  And in a week or two I’ll be fleshing out detail for ‘Painting Too’ the second of the shows on the 2013 Harrington Mill programme blog.