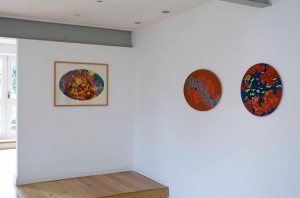 Perhaps it was the suddenness of the request from Luke (proprietor of the Tarpey Gallery) to mount a solo show when I wasn’t expecting it or the fact of the ongoing saga of the holiday breakdown and its aftermath but for whatever reason I’ve nor paid much attention to the current exhibition at the Tarpey Gallery.  I delivered it before the vacation and arrived back the afternoon of the opening…and that was that.  Until today when I went across to photograph it. 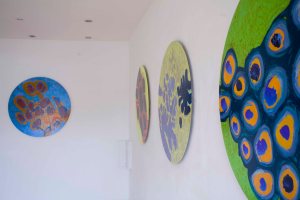 As can be seen it is a relatively small display of seven of the aluminium works and three of the watercolours.  My thinking about the aluminium pieces is that because they had been conceived as part of the bigger display (at Lakeside this winter) the ‘in your face’ coloration is a bit much in this smaller, more intimate, venue.  And the traditional hang (pretty much the only way it could be done in the Tarpey space) doesn’t entirely suit the works either.  That said Luke did a good job in making them ‘work’ reasonably well and overall I’m not too unhappy with the way it looks. 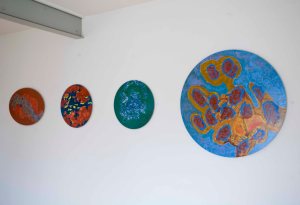 Before the work comes down I shall go back and spend a few more minutes with the pictures – for me the opportunity to see work on walls away from the studio is always worthwhile, and lends a perspective to the process of creation that for me at least I never get in my working space. 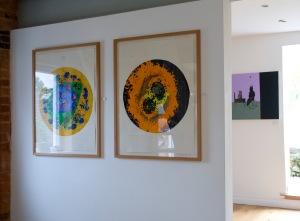 I have also benefitted enormously with this show from Andy Parkinson’s very thoughtful review.  Its good to have the opportunity to read what someone else thinks about your work – especially from a commentator of Andy’s standing and repute.  And also pleased to see that it provoked further interesting debate.

3 thoughts on “An exhibition continues…”